The outsiders is an investigation into what makes a truly great CEO.  The Outsiders is written about eight exceptional CEOs.  These CEOs delivered returns that trounced the S&P500 over the long-term.  These CEOs are in many ways the polar opposite of the household name CEOs we think of today.   The book spends a significant time covering the importance of sound Capital Allocation strategies.

The idea behind conversational capacity is that for any given group of people, there is a list of topics and / or issues that we could rank from most difficult at the top to the easiest at the bottom.  If we started at the bottom of the list the group could have productive conversations and proactively solve issues.  But as we work our way to the top of the list, the group will eventually stall out and become unproductive.  The higher up the list a given group can productively converse is a measure of its conversational capacity.

Weber states that when conversations get difficult most people tend to begin either “minimize” the conflict or trying to “win” the conflict.  The problem is that these two behaviors are unlikely to lead to the best possible outcomes.  And the most effective teams will find a way to operate in the “sweet spot” which is the middle ground between minimizing and winning.

After explaining the concept, Weber went on to provide some tips on how to build the conversational capacity in our given groups.

Tips for Maintaining the Correct Mindset in Meetings:

Other interesting ideas and quotes from the presentation

I recently told my boss that if I had to do it again, I would have focused my early career in sales.  Great sales people are immensely valuable and incredibly hard to find.   A few weeks later, a member of our board of directors recommended I read Exceptional Selling.  In fact, he was even kind enough to send an electronic copy of the book directly to my Kindle.  But as usual, I opted for an Audible copy as well.

Thull’s research is based on some of the most successful salespeople in the world.  And one key point that stuck out to me is that the most successful salespeople in the world are comfortable talking about pricing.  Their comfort is driven by the understanding of the value they bring into collaborating with the customer in an effort to solve the customer’s problems.  Thull also spends a lot of time covering his four-step sales sequence: “Discover, diagnose, design and deliver.”

Side Note: Hat Tip to Mickey Miller for recommending this book. 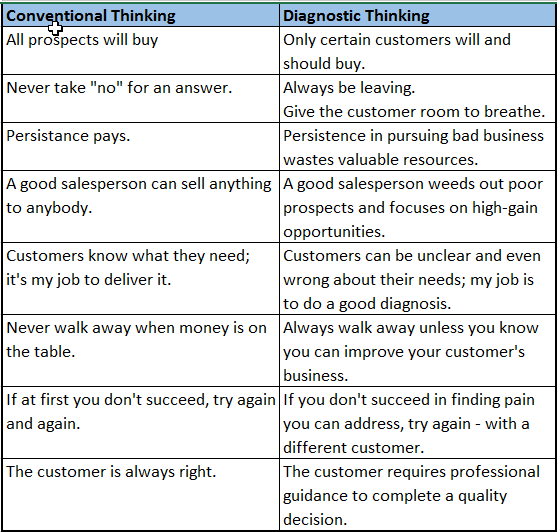