Karl Rove weighs in the possibility of a Donald Trumpf Presidency. Courtesy of Fox News.

From our friends at JibJab.

Here is the full article in the NY Times.

Statistics students are aware of the bias that wording has on poll results.  Here is an example of such an effect.

Note that majorities in both wordings support the right of gays to serve; the biggest difference is in the “strongly support” number.

My favorite American General and Statesman, Colin Powell was interviewed on this morning’s episode of Face the Nation.  The interview was more backward than forward looking than I would have liked.  Powell insisted that he is still a member of the Republican Party and hope the party will broaden its base by becoming more inclusive.  He took the high road when speaking about the recent criticism he has received from Rush Limbaugh and Dick Cheney.   He also discussed Guantanamo Bay and enhanced interrogation techniques.

The International Accounting Standards Board, which is chaired by Sir David Tweedle, has come under scrutiny for bowing to political pressure from the European Union.  The issue at hand is the method banks use to value their assets on the financial statements.  Political interference in the accounting and financial sectors are nothing new in the US or abroad, but one of the key components of the IASB is supposed to be its ability to resist such political pressure.

Sir David, defended the boards decision even though his stated that it nearly led to his resignation.  I am a big fan of the movement to International Accounting Standards, but I forsee such political pressure being a much larger issue then either the Securities Exchange Commission or the IASB has let on so far.

Here is the full story by Glenn Kessler courtesy of the Washington Post. 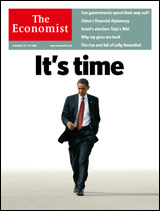 Here is a list of previous presidential endorsements by the magazine:

It is a bit dated, but still worth watching if you haven’t seen it.

A self-deprecating attitude says a lot about someone, props to Sarah Palin for going along with this.

He revealed his endorsement during an eloquent speech this morning on Meet The Press.

He’s proposing a $5,000 tax credit for families so that they can get out there and they can purchase their own health care coverage. That’s a smart thing to do. That’s budget neutral. That doesn’t cost the government anything as opposed to Barack Obama’s plan to mandate health care coverage and have universal government run program and unless you’re pleased with the way the federal government has been running anything lately, I don’t think that it’s going to be real pleasing for Americans to consider health care being taken over by the feds. But a $5,000 health care credit through our income tax that’s budget neutral. That’s going to help

Immediately after hearing this statement, I sent the following text message to several of my peers: “somebody will have to explain the budget nuetral tax credit to me.”

The Tax Foundation has confirmed my skeptcism that John McCain’s plan is not tax nuetral.  In fact, it will add $1.3 trillon to the deficit over 10 years.

To be fair, Senator Biden also made several mistakes and false claims.

See the full break down here.